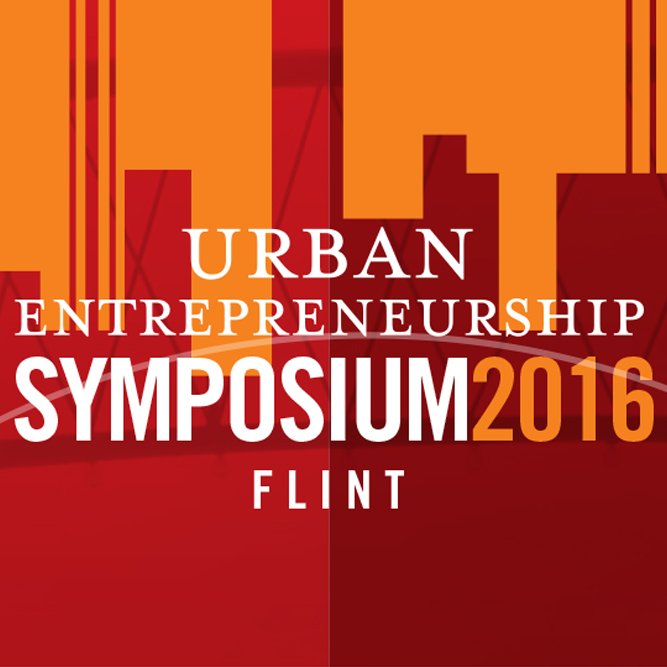 I’m proud to be bringing a very special event to Flint this Fall.  This event, the Urban Entrepreneurship Symposium, aims to improve the quality of life in Flint and similar communities by putting the focus on business innovation and investment. This will be the third year we have organized the symposium. In 2014, we held the event in Ann Arbor. Last year, it was in Detroit. This year, in the aftermath of the water crisis that has dealt such a terrible blow to the city, we decided to bring the Urban Entrepreneurship Symposium to my hometown. We believe that if the long term fortunes of Flint are to improve, we must rekindle the spirit of innovation and entrepreneurship that made Flint a twentieth century industrial powerhouse. We believe, too, that this spirit, and the opportunities that go along with it, must be shared broadly throughout the community. That is why we plan to engage broadly with the citizens of Flint as we plan and produce this event, and why I hope to see many of my friends, colleagues, and family from the Flint area take part. In the coming weeks, you will be hearing much more about the symposium, and the part you can play in making it a success. Your involvement can be a huge part of the change we need to transform this community.

My family’s history in Flint goes way back. My grandfather, William Wise (Bill) Hayden arrived in town shortly after World War I and established a dry cleaning store at Leith and Industrial, across the street from the massive Buick factory. His son, my uncle Bill, was one of the workers who helped lay the bricks on Saginaw Street. My mom, Claudia Louise Tarver, became the first black nursing administrator in the City of Flint when she was appointed assistant director of nursing at Hurley Hospital. My father worked for years at the U.S. Post Office in Flint, first as a letter carrier and then as an equipment repair technician. My sister Bernice was the health services director at Mott Community College. My brother Fred was the first in our family to graduate from a four year college. After leaving Ferris State with a degree in pharmacy, he served in the U.S. Army during the Vietnam War era, then returned to Flint to begin a more than 40 year career at St. Joseph Hospital / Genesys Health System.

Many of you know my history in Flint, but for those of you who don’t, allow me to recap. I grew up on Sixth Street, between Lapeer and Avon. I attended Walker Elementary and Whittier Junior High before graduating from Central High. I attended General Motors Institute (GMI, now Kettering University) for two years before transferring to University of Michigan. I earned bachelor’s and master’s degrees in electrical engineering, then moved to New Jersey to work for AT&T Bell Laboratories. After seven years at Bell Labs, I left with two colleagues and started a telecommunications technology company in the basement of my home. We grew to be a multi-million dollar company with customers in more than 25 countries. In 1995, I sold the company, and in 2007 I returned to Michigan.

One of the most gratifying things about working on this Urban Entrepreneurship Symposium project is being able to work closely with two friends I have known since grade school. Reggie Barnett (Seventh Street) graduated with me at Central High School and attended college at Notre Dame, where he played on the national champion football team in 1974. He then graduated from Duke University with a law degree and an MBA before embarking on a long and distinguished career with IBM. After his corporate career, Reggie ran his own business, Wireless Resources Group, until retiring in 2015.

Karen McDonald Lopez (Ninth Street) graduated from Central with Reggie and me, and received bachelor’s and master’s degrees from MSU (and I don’t hold that against her!). Karen received her law degree from Georgetown University in Washington, DC, and returned to Flint to serve as City Attorney and then later as a Vice President at Hurley Medical Center. Karen now runs her own law practice in Flint.

Both Karen and Reggie serve as board members of the Urban Entrepreneurship Initiative, the organization that produces the symposium. Both have deep roots in Flint, and both are committed to the idea of engaging and empowering the community to bring about the innovation needed to power Flint’s comeback.

In September, we will be out in the community collecting business ideas, community improvement suggestions, and problems (also known as gripes!) from Flint residents. We plan to recognize and reward the best of these at a community reception on October 19. I hope you will take part in this activity, because your ideas and observations can help drive the discussion and shape the solutions. We also need volunteers to help with the event, so if you are interested, send an email to info@urbanei.org. For more information and updates, follow our web site at urbanei.org. We look forward to seeing you out in the community, and at the event in October.

One thought on “To My Friends In Flint: I’m Coming Home”