Uber is an innovative technology company that connects riders with drivers to provide a safe, convenient, and cost-effective method of transportation within metro areas. Additionally, Uber adds value to drivers, who are not employees of Uber, by providing them with the economic opportunity to make additional money in their free time using their own existing assets. 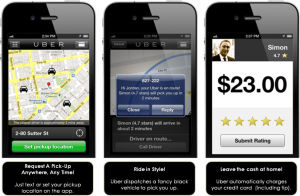 When looking to enter new markets, Uber generally finds cities that have a lot of current users and look to see if there would be enough available drivers. Once they launch in a new market, Uber generally notifies the press and emails people who have already signed up for the service. Uber succeeds in a wide variety of cities, from those with great transportation infrastructure such as New York and San Francisco and those which lack effective transportation options such as Detroit.

Uber launched in Michigan in 2013 and has been successful in filling in some gaps in transportation access in Detroit. The ride service has also been well-received by college students in Ann Arbor.

Drivers generally pay about 20% in commission for each ride to Uber. All riders have an account with Uber with their credit or debit card information attached and they are automatically charged at the end of their journey, which adds an element of convenience that people love.

Uber’s competitive advantage is its efficient use of information, speed and user experience. It’s often cheaper than taxis and you don’t need to call a cab company and wait twenty to thirty minutes. Rather, you simply press a button on your smartphone and a car will usually find you in about five minutes. Uber is able to do this by utilizing their massive amount of information to identify where in a particular city there is a high demand for rides. At the end of your trip, you don’t need to deal with paying in cash or swiping a card either. Instead, you just get out of the car and Uber automatically charges your card on your account. Uber also ensures the safety of the rides through an extensive vetting process which includes background checks, examinations of driving records, and a constant feedback loop that asks riders to rate their drivers after each trip. Uber also provides commercial level insurance and checks the national sex offender list.

Because Uber’s model is so innovative, the company often faces challenges with local regulations and legislation. Uber currently is operating under a two year operating plan with Detroit and is actively working with city councils and staff to change some of these limiting rules.

The benefits of Uber have extended beyond affordability and convenience. There have been studies that show that an Uber presence in cities has lead to reductions in DUIs. Also because of Uber’s unique model, people in areas identified by their cities as underserved by taxis have gained access to rides. 4 out of 10 Uber trips in the city of Chicago have been identified as driving to underserved areas, parts of the city where for safety and other reasons, taxis don’t go as often. As Uber grows and continues to increase the efficiency of its system, for some people owning a car doesn’t make financial sense. Depending on how much you drive in a city, Uber could be a feasible alternative to owning a car. Less cars on the road leads to less carbon emissions, more jobs for drivers, and reduced need for parking spaces.

Uber is in five cities in Michigan and the rider base grows each week, while providing hundreds of drivers full-time or part-time work. Uber’s ultimate goal is to reduce the need for car ownership, so they will continue to expand their services in more markets and work on the efficiency of their platform.